Toxicity and bioaccumulation of ceria nanoparticles 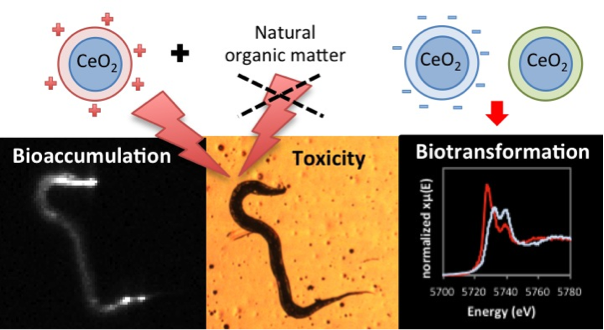 Nanomaterial properties influence their fate, especially surface coatings through which nanomaterials interact with biological surfaces such as cell membranes and macromolecules. Most previous studies that investigated the role of surface coating on bioavailability and toxicity have not taken into account how natural organic matter influences these processes.

Dr. Blanche Collin, a postdoctoral researcher at University of Kentucky (UK), Dr. Jason Unrine and Dr. Olga Tsyusko CEINT faculty members at UK, and a UK masters student Emily Oostveen have recently published a paper in Environmental Science and Technology that addressed this question. They synthesized cerium dioxide nanoparticles (CeO2-NPs) functionalized with positively charged, negatively charged, and neutral coatings and exposed them to the soil organism Caenorhabditis elegans to assess their toxicity and bioavailability. CeO2-NPs are among the most important nanomaterial classes with increasing uses as polishing and chemical planarization media, catalysts in automotive fuel additives and catalytic converters, gas sensors, and other applications. This study showed that the surface chemistry of pristine CeO2-NPs, specifically their charge, had a profound effect on their toxicity. The positively charged CeO2-NPs were significantly more toxic to C. elegans and bioaccumulated to a greater extent than the neutral and negatively charged CeO2-NPs. Surface charge also affected the oxidation state of Ce in C. elegans tissues after uptake. Greater reduction of Ce from Ce(IV) to Ce(III) was found in C. elegans, when exposed to the neutral and negatively charged relative to positively charged CeO2-NPs. The addition of humic acid (HA), an important type of natural organic matter, to the exposure media significantly decreased the toxicity of CeO2-NPs, and the ratio of CeO2-NPs to HA influenced Ce bioaccumulation. When the concentration of HA was higher than the CeO2-NP concentration, Ce bioaccumulation decreased.

This work suggests that although initial surface chemistry had a profound impact on toxicity, environmental transformations (specifically coating with natural organic matter) reduced the effects of initial surface chemistry, and rendered ultra-small (2− 5 nm), positively charged CeO2-NPs significantly less toxic for the end points tested at environmentally realistic ratios of HA to CeO2.  This has profound implications for risk assessment of CeO2 and perhaps other metal oxide nanomaterials.

The paper was recently accepted in Environmental Science and Technology.