DURHAM, N.C. -- In experiments mimicking a natural environment, Duke University researchers have demonstrated that the silver nanoparticles used in many consumer products can have an adverse effect on plants and microorganisms.

Fifty days after scientists applied a single low dose of silver nanoparticles, the experimental environments produced about a third less biomass in some plants and microbes.

These preliminary findings are important, the researchers said, because little is known about the environmental effects of silver nanoparticles, which are found in textiles, clothing, children’s toys and pacifiers, disinfectants and toothpaste.

"No one really knows what the effects of these particles are in the environment," said Benjamin Colman, a post-doctoral fellow in Duke’s biology department and a member of the Center for the Environmental Implications of Nanotechnology (CEINT).

"We're trying to come up with the data that can be used to help regulators determine the risks to the environment from silver nanoparticle exposures," Colman said. CEINT's research is funded by the National Science Foundation and the Environmental Protection Agency.

Previous studies have involved high concentrations of the nanoparticles in a laboratory setting, which the researchers point out, doesn't represent "real-world" conditions. 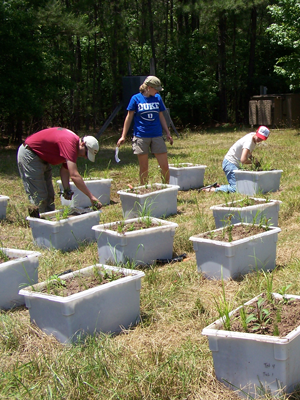 "Results from laboratory studies are difficult to extrapolate to ecosystems, where exposures likely will be at low concentrations and there is a diversity of organisms," Colman said.

Silver nanoparticles are used in consumer products because they can kill bacteria, inhibiting unwanted odors. They work through a variety of mechanisms, including generating free radicals of oxygen which can cause DNA damage to microbial membranes without harming human cells.

The main route by which these particles enter the environment is as a by-product of sewage treatment plants. The nanoparticles are too small to be filtered out, so they and other materials end up in the resulting wastewater treatment "sludge," which is then spread on the land surface as a fertilizer.

The study appeared online Feb. 27 in the journal PLOS One.

The researchers found that one of the plants studied, a common annual grass known as Microstegium vimeneum, had 32 percent less biomass in the mesocosms treated with the nanoparticles. Microbes were also affected by the nanoparticles, Colman said. One enzyme associated with helping microbes deal with external stresses was 52 percent less active, while another enzyme that helps regulate processes within the cell was 27 percent less active. The overall biomass of the microbes was also 35 percent lower, he said.

"Our field studies show adverse responses of plants and microorganisms following a single low dose of silver nanoparticles applied by a sewage biosolid," Colman said. "An estimated 60 percent of the average 5.6 million tons of biosolids produced each year is applied to the land for various reasons, and this practice represents an important and understudied route of exposure of natural ecosystems to engineered nanoparticles."

"Our results show that silver nanoparticles in the biosolids, added at concentrations that would be expected, caused ecosystem-level impacts," Colman said. "Specifically, the nanoparticles led to an increase in nitrous oxide fluxes, changes in microbial community composition, biomass, and extracellular enzyme activity, as well as species-specific effects on the above-ground vegetation."

The researchers plan to continue to study longer-term effects of silver nanoparticles and to examine another ubiquitous nanoparticle – titanium dioxide.