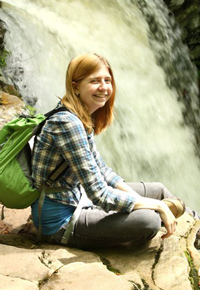 In the long run, most of the nanosilver that will enter aquatic environments will end up in river and lake sediments, so it is important to know what happens to the silver nanoparticles in these sediments. Amy Dale, a Ph.D. student CEINT affiliate at Carnegie Mellon University has developed the first model of nanosilver chemistry in aquatic sediments. This model has shown that in carbon-rich systems a large fraction of the nanosilver will be in the form of silver sulfide, an insoluble and much less toxic form of silver. The model has also shown that seasonal releases of toxic silver ions from the sediments to the overlying water will occur during the warm summer months. This model advances our understanding of the fate of nanosilver in aquatic environments and was recently awarded a "Best Poster" prize at the December, 2012 meeting of the Society for Risk Analysis in San Francisco.