The Clarke Prize Lecture was given by environmental engineer Mark R. Wiesner, Ph.D., P.E., the James L. Meriam Professor of Civil and Environmental Engineering at Duke University, who was selected as the 2011 NWRI Athalie Richardson Irvine Clarke Prize recipient because of his groundbreaking efforts and leadership in improving water quality through advancements in membrane and nanotechnology research. 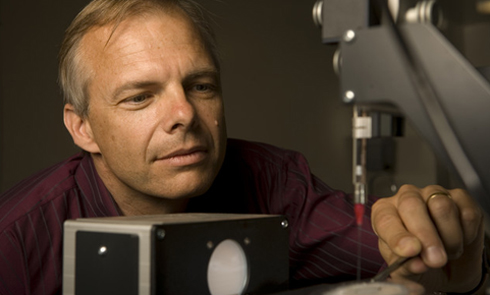 Consisting of a medallion and $50,000 award, the Clarke Prize is given out each year to recognize research accomplishments that solve real-world water problems and to highlight the importance of and need to continue funding this type of research.

During Wiesner’s Lecture, which was entitled Nanomaterials, Water, and the Directed Self-Assembly of Environmentally Responsible Industries, nanomaterials were defined as having “a characteristic dimension from 1 to 100 nanometers and having ‘unique’ or ‘novel’ properties.” One nanometer is 40,000 times smaller than the thickness of a human hair.

An example of a nanomaterial is a carbon nanotube, which is 100 times stronger than steel and 10 times more electrically conductive that copper, yet is very light. Carbon nanotubes have been used to enhance the performance of membrane technologies, which are used to separate contaminants from water and wastewater. In fact, according to Wiesner, it has been shown that membranes incorporating small amounts of carbon nanotubes resist breakage to a much greater extent than membranes without carbon nanotubes. It has also been shown that water flows thousands of times faster than predicted by theory through membranes made from carbon nanotubes. The result of using nanotechnology in this instance is more efficient and effective membranes.

Other examples of areas where nanotechnology can be used to significantly improve and enhance water treatment technologies are as follows:

Wiesner pointed out that we need to ensure that the production, use, and disposal of nanotechnologies do not degrade our water resources or present a threat to human health or the environment. After a decade of research, scientists have determined that nanoparticles can be taken up by plants, may bio-magnify in food webs, and may produce toxic or developmental effects in the laboratory. However, to date, there have been no documented cases of a specific human disease or environmental damage caused by engineered nanomaterials. Wiesner attributed this both good luck and the early intervention of the scientific community to investigate possible risks of nanotechnology. As he described proactive research on the risks of emerging technologies, such as nanotechnologies, as a public good that is not readily provided by the private sector, he underscored the need for governments to create the conditions that allow these technologies to be commercialized in an environmentally responsible manner.

The economics and broader environmental impacts of applying nanotechnologies also remain a challenge, said Wiesner. Take, for example, the carbon nanotubes – making one gram of carbon nanotubes requires over a thousand times more energy than a gram of material made using conventional production methods. Nanotechnology production can also be costly; for instance, the proposed use of “nano-rust” to remove arsenic from water is thousands of times more expensive than currently available technologies. In addition, some nanotechnologies are made from precious metals and rare earth elements, which raises questions regarding the sustainability, security, and environmental damages associated with obtaining these elements.

“I am optimistic,” concluded Wiesner, “that technological innovations, such as those inspired by nanotechnology, will ultimately provide us with cleaner sources of energy, greater access to potable water, and improved sanitation services.” He cautioned that “technological advances can only serve to treat the symptoms of the more fundamental problems of overconsumption, waste, and market incentives that favor short-term gain over the interests of our planet’s current and future generations.”

Wiesner is the eighteenth recipient of the NWRI Clarke Prize. Since the late 1990s, he has taken the lead in studying the fabrication, transport, fate, toxicity, and risk of nanomaterials in the environment. He co-edited the textbook, Environmental Nanotechnology, in 2007, and currently serves on a National Research Council committee to develop a research strategy for environmental, health, and safety aspects of engineered nanomaterials. One of his major accomplishments was the creation of the Center for the Environmental Implications of NanoTechnology (CEINT) at Duke University, where he serves as Director. A multidisciplinary research effort supported by the National Science Foundation and U.S. Environmental Protection Agency, CEINT is focused on understanding nanomaterial behavior from the nano-scale to the ecosystem-scale and identifying possible risks to human health and the environment.

Copies of the 2011 Clarke Lecture may be downloaded at www.nwri-usa.org/laureates.htm.