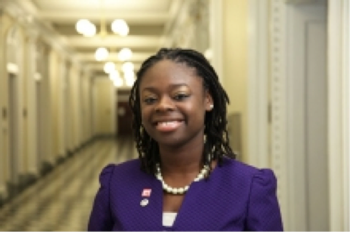 Ms. Shorma Bianca Bailey, CEINT REU student (summer 2011) has been invited to the White House twice in the last year by the Obama administration for her inspirational work as a mentor and as role model for minority women in science and engineering.

A senior Chemical Engineering major from Howard University, Ms. Bailey was honored fall 2011 at a White House awards ceremony for her "Leadership in Mentoring Women & Girls in Stem" thru Obama's Winning the Future Initiative. Ms. Bailey, was cited for her mentorship on Howard University's campus where she serves as operational manager for Girls Incorporated and teaches an engineering curriculum to middle school girls. In addition Ms. Bailey has shared her success story at the Office of Justice and Delinquency Prevention Conference listening session for the National Girls Institute. In her role as President of Engineers without Borders, Howard University Chapter, she has also led teams of undergraduate engineers to participate in water treatment projects in Brazil, Haiti and Kenya- one project of which included a Kenyan orphanage.

Ms. Bailey joined a panel of trailblazing women in STEM fields who shared their experiences and encouraged young women to follow in their footsteps. Panelists included

Since completion of her CEINT REU program, Ms. Bailey also won a full scholarship from the National Consortium for Graduate Degrees for Minorities in Engineering and Science, Inc. and was accepted to graduate school for fall 2012 where she plans to obtain her PhD in Environmental Engineering with a focus on international development. Congratulations Bianca!