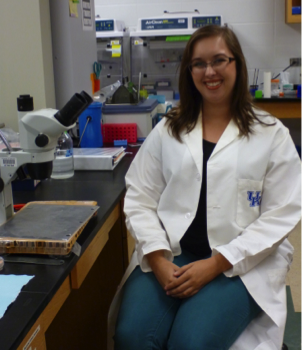 Emily Oostveen, an MS student at the University of Kentucky, working under the direction of Jason Unrine, presented a platform presentation entitled “The Role of Surface Chemistry in the Toxicity of Manufactured Cerium Dioxide Nanomaterials to Caenorhabditis Elegans” at the Ohio Valley Chapter Regional Conference for Society for Environmental Toxicology and Chemistry in Bloomington, IN on September 26, 2014. Her platform talk was awarded 2nd place at the conference. Emily’s presentation detailed how the toxicity of ceria (CeO2) nanocomposites to the nematode Caenorhabditis elegans is influenced by the charge of their polymer coatings. Ceria nanomaterials are widely used as semiconductor and mirror polishing agents and diesel fuel catalysts. They also have potential to act as medicinal antioxidants. While some researchers have found ceria nanomaterials to induce oxidative stress, others have observed the nanomaterials scavenging free radicals. When these nanomaterials are synthesized, surface coatings are frequently applied to reduce aggregation and increase stability. However, the influence of these coatings on toxicity has not been well studied. By using cationic, anionic, and neutral polymers to probe the role of surface charge in toxicity, Emily and colleagues found the cationic particles to induce far more toxicity than anionic or neutral coatings. These findings should help in the design of safer, more environmentally friendly nanomaterials.