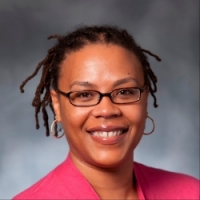 Adrienne D. Stiff-Roberts is an Assistant Professor in the Department of Electrical and Computer Engineering at Duke University. Dr. Stiff-Roberts received both the B.S. degree in physics from Spelman College and the B.E.E. degree in electrical engineering from the Georgia Institute of Technology in 1999. She received an M.S.E. in electrical engineering and a Ph.D. in applied physics in 2001 and 2004, respectively, from the University of Michigan, Ann Arbor, where she investigated high-temperature quantum dot infrared photodetectors.