Maintaining the complexity of natural systems is crucial to environmental research at the nanoscale. The Center for Environmental Implications of Nanotechnology (CEINT) has led the way. 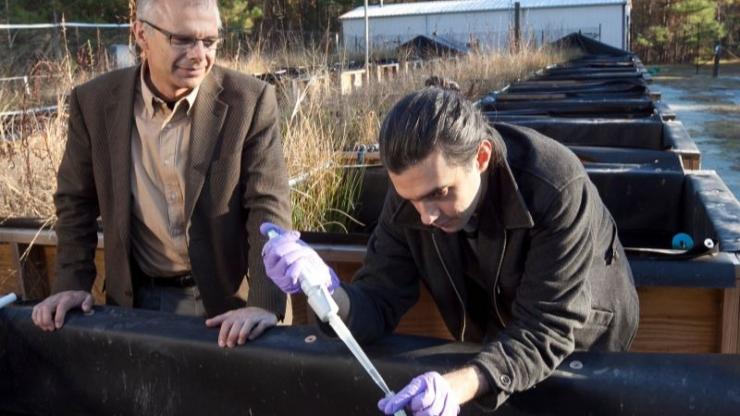 Some of the biggest advances in modern technology are owed to the tiniest of materials—nanomaterials, a class of materials between one and 100 nanometers in diameter, or about 1/1000 the width of a human hair. Nanocerium is added to diesel fuel to help break down the components of harmful exhaust. Light-absorbing nanomaterials are applied as films in photovoltaic applications, making solar energy more accessible and affordable by replacing the rigid crystalline panels of solar cells with thin, flexible materials. Antimicrobial nanomaterials like silver nanoparticles are added to personal care products or water filters to eliminate bacteria. Therapeutic nanomedicine is enabling precision drug delivery.

Nanomaterials are virtually everywhere, but until fairly recently we could not say with any certainty where these materials were ending up in the environment—or what they might do once they got there.

CEINT, the Center for Environmental Implications of Nanotechnology, has changed that. The decade-long effort has not only answered questions about the transport and toxicity of nanoparticles, but revolutionized the way the class of materials is studied and opened doors to designing more efficient and effective nanomaterials along the way. And, as new potential threats—like nanoplastics—propagate in the environment, researchers have a head start in understanding how to track their impacts.

CEINT was launched in 2008 by Duke professor of civil and environmental engineering and principal investigator Mark Wiesner. At the time, manufactured nanomaterials were just beginning to flood commercial markets, added to everything from sanitizer to sunscreen. Wiesner and his collaborators—a group from Duke, Carnegie Mellon, Howard University, Virginia Tech, Stanford University, the University of Kentucky and Baylor University—saw an opportunity to explore potential safety issues posed by these materials before large-scale problems occurred.

The group proposed creating a center to explore fundamental questions about the fate of nanomaterials in the environmen­t, and the implications of their presence. The center would oversee the construction and operation of an outdoor experimental facility where water, soil, flora and fauna would approximate a real freshwater wetland ecosystem. These “mesocosms” would give the group a central location where they could conduct interdisciplinary and individual research, and also learn firsthand from one another’s knowledge, perspectives and work.

The center has been funded by $30 million in grants from the National Science Foundation and the US Environmental Protection Agency (US EPA) over the course of 10 years, and in that decade CEINT has published a vast body of work explaining the environmental fate of nanomaterials, and organismal and ecosystem responses to exposures to those materials.

In broad strokes, a few of the center’s major contributions to the field follow.

Understanding the limits to the notion of “nanotoxicity”

When you change the size of certain materials, you can also change their properties. Take gold, for instance—gold in bulk is inert. Make a gold nanoparticle, however, and it becomes a highly reactive catalyst. People were understandably concerned that the same shifts might happen with toxicity—that a material that is harmless at the bulk level might become toxic at the nanoscale.

But that concern appears to be unfounded.

“We haven’t found anything uniquely ‘nano’ about toxicity,” said Wiesner. Where researchers saw toxicity, either chronic or acute, the material being examined met one of three criteria: 1) it was toxic in its bulk state; 2) the doses used to reach toxic levels were far beyond what would be encountered in the natural environment; or 3) the studies were performed with cell cultures rather than with whole organisms.

“We have observed many cases of fate and exposure being altered at the nano-scale, that are explained based on known principles of colloid science and ultrafine particle exposure,” said Wiesner. These have an effect on the risk posed by a given material, but the underlying mechanism of toxicity is not new.

This finding is incredibly important, because it informs the decision of whether and how to regulate nanomaterials as a class.

“It makes much more sense to talk about the toxicity of a given material—of carbon nanotubes, or silver or copper,” said Wiesner. “We know that silver is toxic. If you make a nanoparticle out of silver it’s going to be toxic to someone or something, and the dose at which it becomes toxic may change. So it makes sense to regulate silver. But we are not seeing a generalizable notion of nanotoxicity that makes otherwise benign materials toxic when they are fabricated as nanomaterials.”

CEINT has paid special attention to nanosilver because it is included in so many consumer products, including disinfectant sprays and laundry detergents, due to its antibacterial properties. Those products end up in wastewater streams and waterways, which depend upon a healthy bacterial population for efficient biogeochemical and nutrient cycling.

CEINT co-PI Richard Di Giulio, an environmental toxicologist and professor in Duke’s Nicholas School of the Environment, has studied the effects of nanosilver on ecosystems within CEINT’s mesocosms, and he has more good news.

Di Giulio also investigated nanoscale titanium dioxide—used widely in sunscreen and cosmetics—because of its photoactive properties. “We were interested in whether there would be phototoxicity,” said Di Giulio. (There was not.) Then he explored the material’s interactions with polycyclic aromatic hydrocarbons, which are released from burning carbon and act as potent carcinogens. He thought he might see synergy or interaction between the two classes of materials. (He did not.)

Now, Di Giulio’s outlook on nanomaterials is cautiously optimistic.  “Our conclusion is that the benefits of manufactured nanomaterials outweigh the risks,” he said.

Arriving at this conclusion about nanomaterials and toxicity required a willingness to experiment with wildly different approaches—but even the center’s false starts yielded valuable insights into experimental design.

At first, Wiesner’s group deployed a high-throughput screening strategy in an attempt to methodologically assess nanomaterials’ toxicities. With the resulting data, they hoped to generate heat maps illustrating the risks posed by various materials. But the researchers soon discovered that the tests in the lab and the tests in the center’s mesocosms were yielding different sets of data.

Wiesner said that was because the complicated pathways and interactions that were important in the real systems were excluded from the experiments in the lab. But, said Wiesner, “It’s pretty hard to reduce reality to a few microliters.”

Consider silver: in its pristine nanoparticle form, it is toxic to many aquatic organisms, largely due to silver ion release. But when the silver nanoparticle is transformed to silver sulfide in the environment, it poses much less risk to environmental systems.

“One of the significant outcomes of our center, is this: if you’re testing for toxicity but you’re looking at pristine nanomaterials, that’s sort of misguided,” explained Deputy Director and Carnegie Mellon professor of environmental engineering Greg Lowry. “Because what ends up in the environment is not pristine nanomaterials, but transformed ones. Those are the ones that move around in the environment. Those are the ones an organism seizes.”

In understanding this, said Lowry, “the mesocosms were everything.” 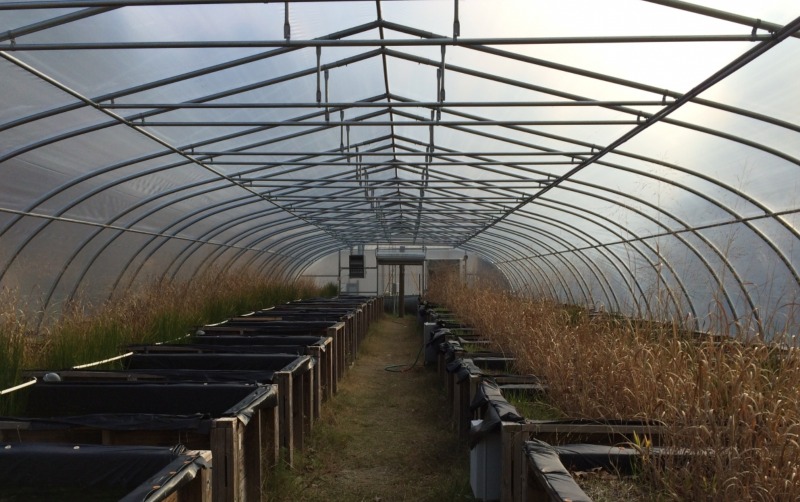 The approaches that an environmental engineer like Lowry takes are starkly different from the approaches that ecologists take, a difference made clear in one of the mesocosm’s earliest nanosilver experiments. Lowry proposed dosing the mesocosm with nanosilver at 10 parts per million—a concentration that he knew he would comfortably be able to measure and monitor. The ecologists were aghast—they were accustomed to working in the parts per billion range.

“Right away, we were five orders of magnitude apart from each other,” said Lowry.  “If you look at the first mesocosm study, it used 25mg per liter—a compromise—and still it killed seemingly everything, and completely altered the response of the system. With the most recent study, we put in 70 parts per billion, once a week, for 9 months. So we, as a team, evolved to figure out exactly how to run these mesocosms in a way that was really representative of natural anthropogenic inputs.”

Translating these results to data that is relevant to policymakers adds another necessary layer of complexity; after all, someone developing water rules might not be interested in how silver transforms in an ecosystem. They are looking for a response—a result that they can use to regulate effectively.

“Again, we were miles apart,” said Lowry. “But working with risk assessors made me think about what I measured, how I measured it, and how I could get them the information they need. It’s a way to focus the research so that it is practical and realistic. It changed my life,” he added. “It changed the way I do my job.”

Another way that CEINT maintained complexity in its studies was through the development of a functional assay—a kind of “midway” measurement that can be used in models to predict how a nanomaterial might act in a complex system. This includes predictions about surface affinity—what makes a particle want to stick to one kind of surface over another. The concept of functional assays has been adopted by the US EPA, the Organisation for Economic Co-operation and Development and the major European research groups working in this area; it is just one example of the international impact that CEINT research has had on the trajectory of research in this field and emerging approaches to regulation.

By gaining a better understanding of the environmental behavior of nanomaterials, researchers can develop better ways to apply materials for photovoltaic uses, better strategies for applying pesticides, and better formulations for targeted medication delivery.

They can also use this knowledge to better characterize emerging issues, like the increasingly ubiquitous presence of plastics in the environment.

Clearing a path for future research

“We have methods to look at a class of materials that was poorly understood and poorly appreciated,” said Wiesner. “And now these methodologies we developed are also being applied to microplastics and nanoplastics—they don’t have to reinvent the wheel.”

“The thing with plastics is, when they’re put out into the environment, the sunlight will gradually break them down, but they just get smaller and smaller and smaller,” explained Di Giulio. “What happens when these tiny particles are ingested, or even absorbed through the gills of animals?”

“We’re definitely seeing interesting effects,” said Di Giulio. He found nanoplastics in the heart and brain tissue of the fish, and determined that the plastics were being passed maternally from one generation to the next.  “We definitely see some toxic effects on heart function. We’ve seen some behavioral effects and we don’t know if they’re secondary to the effects on the heart, or if they’re neurological,” he said. 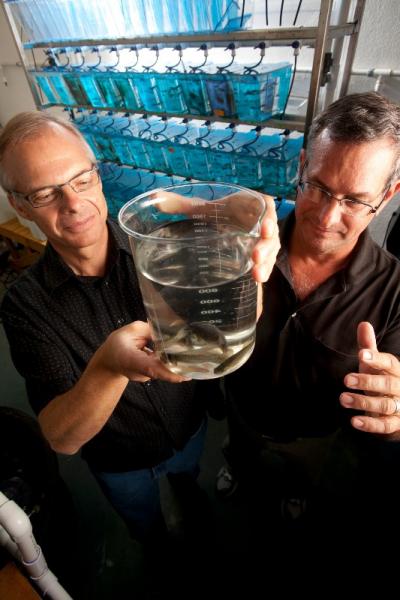 According to Di Giulio, cardiovascular development in zebrafish is quite similar to development in humans; one experiment that he plans to conduct in the near future is to put the compromised zebrafish in swim tunnels—the fish equivalent of a treadmill—to see how far and fast they can swim, and determine whether their aerobic capacity has been affected by their exposure to the plastic particles.

By contrast, other CEINT researchers are pivoting from risk assessment, and focusing their energies on developing safer agrichemicals.

“We always thought that plants got most of their metal in a dissolved form, through the roots. Now we know that they actually take up particles,” said Wiesner. According to Lowry, they can achieve 100 percent absorption of a selected chemical simply by spraying the plant’s leaves with nanoparticles, while protecting the soil and water from contact with fertilizers and pesticides.

“We’re still trying to figure out how to get the nanoparticles to the various places in plants—roots, chloroplasts,” mused Lowry.  But at its heart, the research problem is one of fate and transport—and every ray of light that CEINT has shone on the applications, interactions, and implications of nanomaterials is helping to solve it.